“At a time when so many sports figures have come to personify scandal and bad behavior, how refreshing it is read the inspiring tale of Gino Bartali’s life. The McConnons have drawn a portrait of the Italian cycling legend that uplifts the spirit, and reminds us of the many ways tenacity and faith can reshape the world. This lively book will ride off with your heart and cycle through your memory for years to come.”
— Raymond Arroyo, New York Times Bestselling Author/ Host of EWTN’s “The World Over Live” 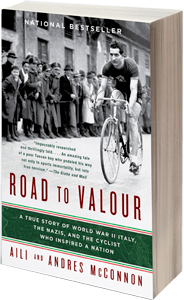